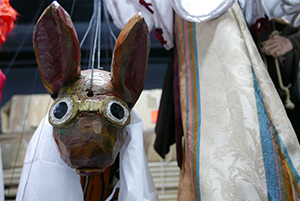 The Master of the Accademia Teatro Dimitri in Verscio is aimed at professionals and graduates of the performing arts. The Master program focuses on the process of theatrical creation and artistic reflection, and provides time for development and the realization of an individual project for the stage. The training, structured modularly and composed of workshops, courses, and seminars, allows each student to develop their own expressive capacity in terms of composition and theatrical creation, to cultivate their own aptitude for theatrical reflection and self-criticism. The Masters is part of the Master-Campus-Theater-CH which unites various schools of theater in Switzerland (Hochschule der Künste Bern, Haute école de théâtre de Suisse romande, the Zürcher Hochschule der Künste, and the Accademia Teatro Dimitri).